15th August, 2013:
SWANIRVAR is one of the members of North 24 Parganas District Health forum. This forum conducts ‘BASIC HEALTH CARE & SUPPORT PROGRAMME’- supported by – MEMISA/DGCD BELGIUM and is being facilitated by the West Bengal Voluntary Health Association (WBVHA).
Our project villages are –PARPATNA and KURULGACHA both under Chakla Gram Panchayat under Deganga Block. Reasons for choosing these villages are as follows:
Most backward villages as per census 2001
Minority dominated villageRest of the populations are either Schedule Caste/ Schedule Tribes
Most of the villagers live below the poverty line.
Distance of the nearest PHC – 15KM, BPHC-20KM, State General Hospital( Barasat):  37KM, Medical Collage ( R G KAR, Kolkata): 60KM
Livelihood: Marginal farmers, day labour and fishermen.
Bad condition of roads, became worse during monsoon. Govt ambulance refuses to give service in those villages due to dilapidated roads.
Nearest Town / Bazar : 10KmPopulation: Parpatna: 3105, Kurulgacha : 2630
High rate of IMR and MMR as compared to other villagesMalnutrition of the children : 0-6 yrs: 10% ; Adolescence: 50% of the total
Only 3 ASHA women give health service in these two villages: 2000 population / 1 ASHA women.
Nearest sub-centre is PARPATNA health sub-centre which is 5Km from the village kurulgacha. The building is in a dilapidated condition and is opened once in month. The building remains as a haunted house and full of weeds. ( see pic-1) 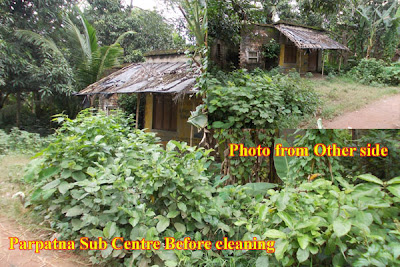 We started our interventions from January, 2010 in these two villages. Before that we did awareness on Tuberculosis and its treatment, some rehabilitation programme on tuberculosis affected patients. We started mass awareness on ANC and PNC mothers health,  ICDS centre boost up, spot feeding in the ICDS centres, nutrition and its relationship with diseases, savings for better health, Geriatric care, NRHM facilities for the villagers, promotion of Integrated Management of Neo Natal and Childhood Illness(IMNCI). We also encouraged the villagers to made a small herbal gardens adjacent their homes. ( see pic –II and III) 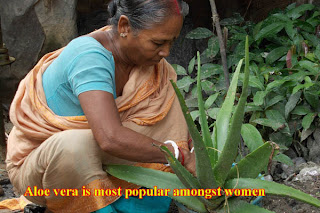 We also motivated villagers to form a Village Development Committee (VDC) for the successful implementation of the above programmes. They found that Parpatna health sub-centre becoming a hunted place and the area was full of bushes and weeds. They proposed to clean the place on 15th August as the mothers and children were coming to the sub-centre on regular basis. They asked for some Tiffin support from us. We accepted their proposal and sent our social mobilizers – Golapi Bibi and Jayanti Biswas on 15th August, 13 to the sub-centres. 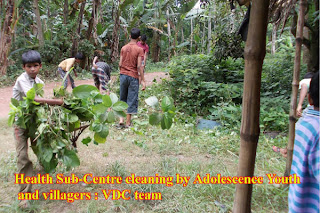 The VDC members cleaned the places. Amongst them, the youths took special initiatives to clean the bushes and weeds. Once they worked with our KKB team and participated in such development activities. Their parents were also present. Some rural women also joined with them.
After the cleaning they expressed the happiness and planned to do some renovation works in future. Local ASHA staff also came to that place to give their moral support in this work. The VDC members decided to raise the renovation issue to the Panchayat and would asked the Panchayat members to take special initiatives to repair this sub-centre. They also expressed the gratitude to SWANIRVAR for their interventions in community health in these villages. 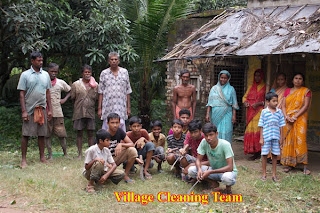